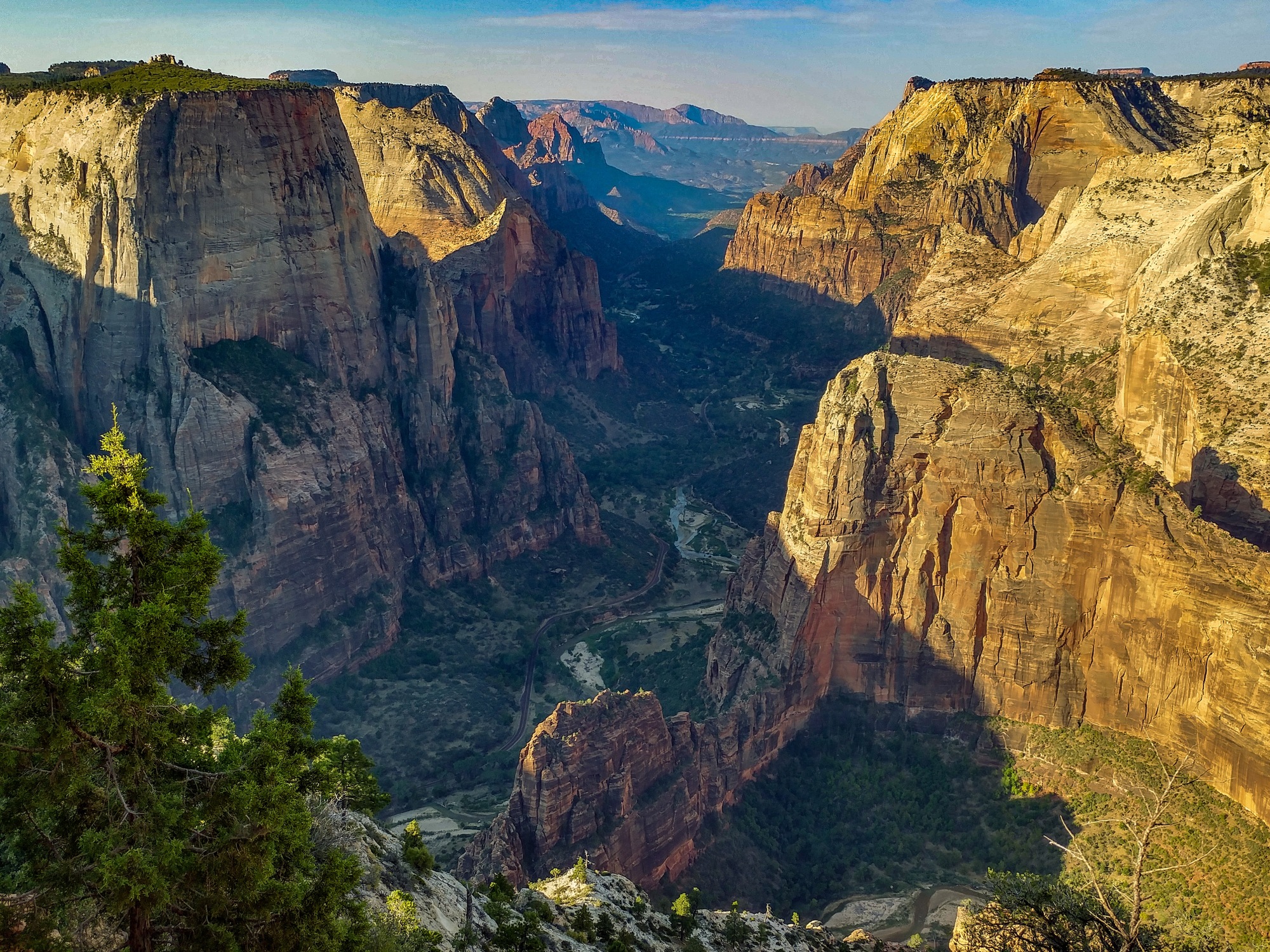 This post is the third in a seven part series about our trip through six national parks and other landmarks in Arizona and Utah over Labor Day Week in September.

After our visit to the photogenic Antelope Canyon X and the Horseshoe Bend of the Colorado River, we headed west to Zion National Park. Zion is probably best known for two features: the cold wade through the waters of the Narrows (a slot canyon formed by the Virgin River) and the vertigo-inducing hike to Angel’s Landing.  Being the risk-averse, cold-fearing duo that we are, we instead explored a number of other sections of the park, and we discovered places of incredible beauty, colorful contrasts, and great scenic diversity. Because of its beauty and diversity, Zion ranks as one of the favorite parts of our trip.

We visited Zion for 1 evening and 1 day. If you’re doing the same, we suggest the following itinerary:

We entered Zion National Park from the East along the Zion-Mt. Carmel highway. The first major pull-out after you enter the park is for the Checkerboard Mesa, a unique rock formation that has developed vertical and horizontal striations because of layering and weathering. However, there are many other pull-outs along the road that highlight the unique features of the highway: the red roadway framed by white and red rocks (and blue skies, if you’re lucky).

Our first hike in the park started at a small parking strip just before the second tunnel after the park entrance, the 1-mile round-trip trail to Canyon Overlook, which takes about a half hour. After taking one wrong turn on this trail, we learned that the key is to hug the rock wall on the right as you ascend past a giant natural amphitheater and a slot canyon.

At the top of the trail, you’ll get a jaw-dropping view of Zion Canyon. The canyon can be partially in shadow in the late afternoon, so Vijay used an HDR setting on his camera to capture the interplay of light and shadow.

Back down at the bottom of the trail, we hopped back in the car and continued to drive along the Zion-Mount Carmel highway to Canyon Junction, also known as the Watchmen Bridge. We pulled over in a small parking lot just past the bridge. This is a popular gathering spot at sunset, but the view of the Watchmen mountains over the Virgin River is stellar anytime. The pedestrian path is very small, so watch out for cars and passing shuttles.

After our stop, we continued into Springdale and checked in at our hotel. There are plenty of dining options in town, and we chose a large, tasty Mexican meal at Oscar’s Cafe followed by some delicious and inexpensive ice cream at the Springdale Candy Company (bonus: you can split a single, heaping scoop into multiple flavors). We called it an early night as we had an early morning ahead of us.

The next day, we grabbed a quick bite at the hotel and headed over to the park. If you are parking in the park’s lot next to the Visitor Center, remember to display your pass or entry receipt in your vehicle – the entrance booths are not manned in the morning but you still need to show proof of payment. We caught one of the first shuttles of the day; the narration on the shuttle was very entertaining and full of useful information about the park and its history.

We decided to tackle the longest hike first: the 8-mile round-trip trail to Observation Point. We loved this trail because it one of the most diverse trails of any of the ones we have experienced in the National Parks, with spectacular views from above and within different types of canyons.

For this trail, we rode the shuttle to Weeping Rock Trail Head and followed the signs for Echo Canyon and Observation Point. There are bathrooms and water at the trail head. Almost immediately after starting out, we climbed a series of switchbacks overlooking a bend in the Virgin River. The glow of the canyon and river at sunrise was quite spectacular. 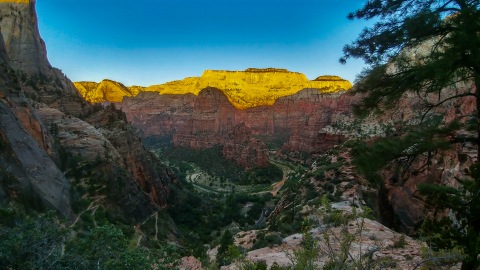 After a breathtaking (pun intended) ascent of 1000 feet or so, we spit out into the unique landscape of Echo Canyon. With slot canyons, steep walls, and large washes, this canyon had a unique and beautiful landscape.

Past Echo Canyon, we continued our ascent to Observation Point, staying to the left, i.e. continuing on the East Mesa Trail,  as we passed the junction with the East Rim Trail on the right. This section of the trail was the most difficult, with the rarefied air making the elevation change much harder to handle. It was also among the most beautiful: as the sun continued to rise, the colors on the rock reflected incredible hues of yellow and orange. 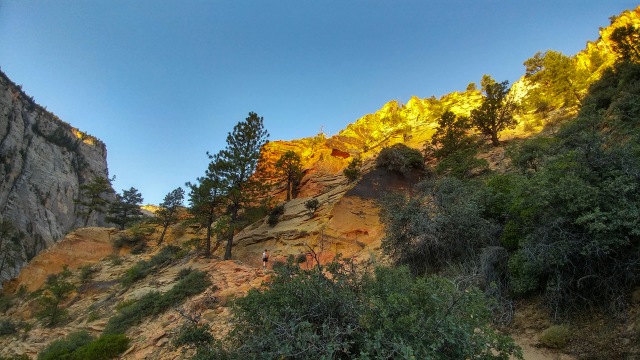 After ascending, the final part of the trail meanders around the edge of the canyon. To reach Observation Point, be on the lookout for a trail to your left that leads to a spur in the canyon wall. From the point, you can also probably pick out the line of hikers waiting to get to Angel’s Landing, as well as the steep drop-offs that make Angel’s Landing famous. Take the time to enjoy all of the views of Zion Canyon that you get along the trail; we thought that some of the views from the top part of the East Mesa Trail rivaled the view from Observation Point itself.

After a quick photo at the top, we headed back down to the trail head, finishing the hike in under four hours. We were wise to start out early, as the temperature was uncomfortably warm on the final part of our descent.

We decided to continue clockwise along the shuttle route to the Temple of Sinawava to experience another of Zion Canyon’s classic hikes, the Riverside Walk. This trail winds along the Virgin River past beautiful hanging gardens to the entrance to the Zion Narrows. If you aren’t in the mood to get wet, you can stop at the first river crossing, dip your feet in, and continue on your way, as we did.

Next, we rode the shuttle back to the Zion Lodge; the large lawn here is great for a picnic if you can find some shade. We were happy to find nice bathrooms, plenty of cold water, ice cream, and other snacks and meals. The lodge was also the starting point for our final walk in the park, a short uphill hike to the Emerald Pools. The Lower Emerald Pool is just over a half mile from the trail head, but that was plenty for us in the afternoon heat. The waterfalls were down to a trickle in early fall, but were very beautiful.

We left the park in the mid-afternoon  and immediately set out for Bryce Canyon, but in retrospect we should have probably stayed for one more day in Springdale – there were many more lodging and dining options there than in Bryce Canyon City, and Bryce Canyon is only two hours away. If we had stayed in the park longer, we probably would have checked out the Court of the Patriarchs, a set of majestic cliffs visible from a short walking trail.