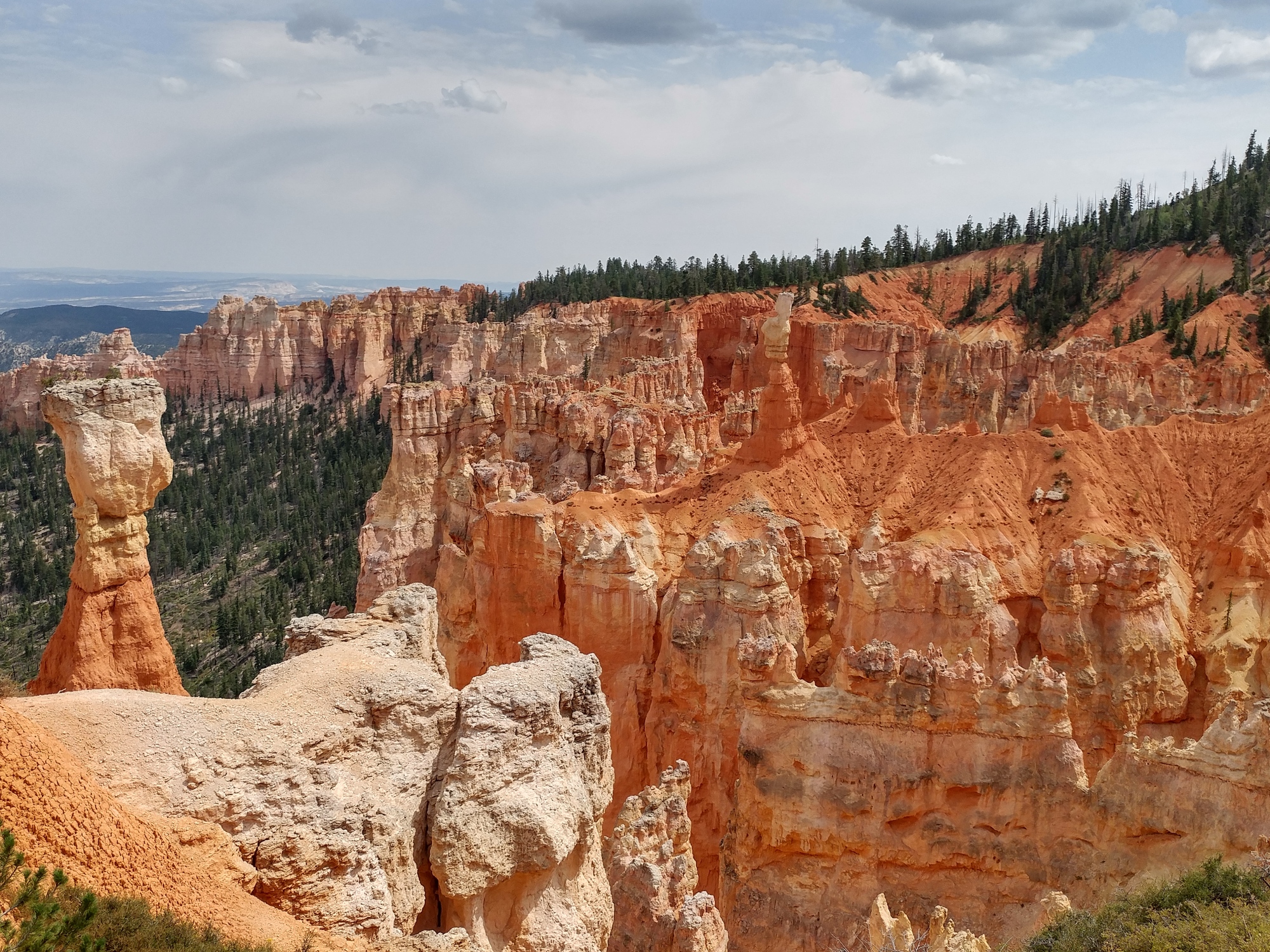 This post is the fourth in a seven part series about our trip through six national parks and other landmarks in Arizona and Utah over Labor Day Week in September.

After our epic visit to Zion National Park, we left back along the Zion-Mount Carmel highway and headed north on highway 89 to Bryce Canyon. Bryce is known for its hoodoos, incredible spires of rock that form because of freeze-thaw cycles and subsequent weathering. In addition, Bryce has a number of other beautiful rock formations, including fins, natural windows, and natural bridges. The landscape seems to be from a whole other world, but the park is easily explored in a day.

To get a lot of different views in one hike, we took Bryce’s famous “Figure 8” loop (see page 7 of the park guide). The hike is just about 6.5 miles and took us about 3 hours to complete (we were hoofing it to avoid getting caught in the rain).

We got our first taste of Bryce’s hoodoos from the rim of the amphitheater at Sunrise Point, where you get an awesome panorama of many famous rock formations in the park, including Thor’s Hammer.

We started from Sunrise Point and meandered down into the canyon along the Queen’s Garden Trail. The trail is named after a hoodoo that looks like Queen Victoria, but the most impressive parts of the trail are the meanders past the hoodoos as you descend into the canyon.

Incidentally, if the weather is clear and the moon is full, you can also sign up for a guided full moon hike into the Queen’s Garden. To do so, you have to participate in an in-person lottery and have your shoes inspected at the Bryce Canyon Lodge at 4PM (call ahead to confirm the time for the lottery).

After you see the Queen, backtrack a bit to the junction with the Navajo Loop and head into the forested area, following signs for the Peekaboo Loop. We followed the Peekaboo Loop  clockwise over a series of rolling hills that can be quite steep in sections. However, this loop was the most spectacular part of this hike. Early on, you get an amazing platform with a 360° panorama of hoodoos in Peekaboo Canyon.

After some up and down, you’ll come to the Wall of Windows, two natural windows positioned high above the canyon floor. This is one of the main features of this section of the park.

As you finish out the Peekaboo loop, you’ll continue to see amazing rock formations, including some tunnels straight through the red rocks and towering rock fins. 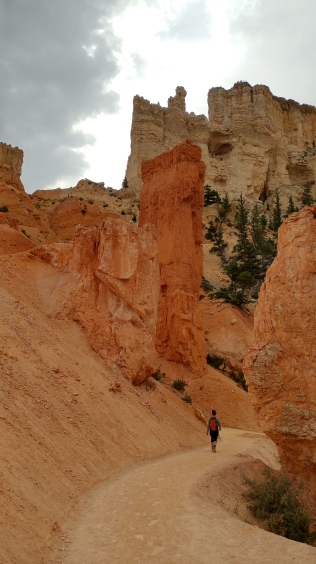 After you complete the loop, you’ll return to the forested area and return to the junction of the Queen’s Garden and Navajo Loop. This time, you’ll take the Navajo Trail through the famous Wall Street section of the park, which is a kind of slot canyon between enormous rock fins.

Many people advocate doing the Figure 8 in reverse since the Wall Street section has steep switchbacks; however, the switchbacks didn’t last for very long and we thought that it was very dramatic to walk up through Wall Street to see the fins towering above you. 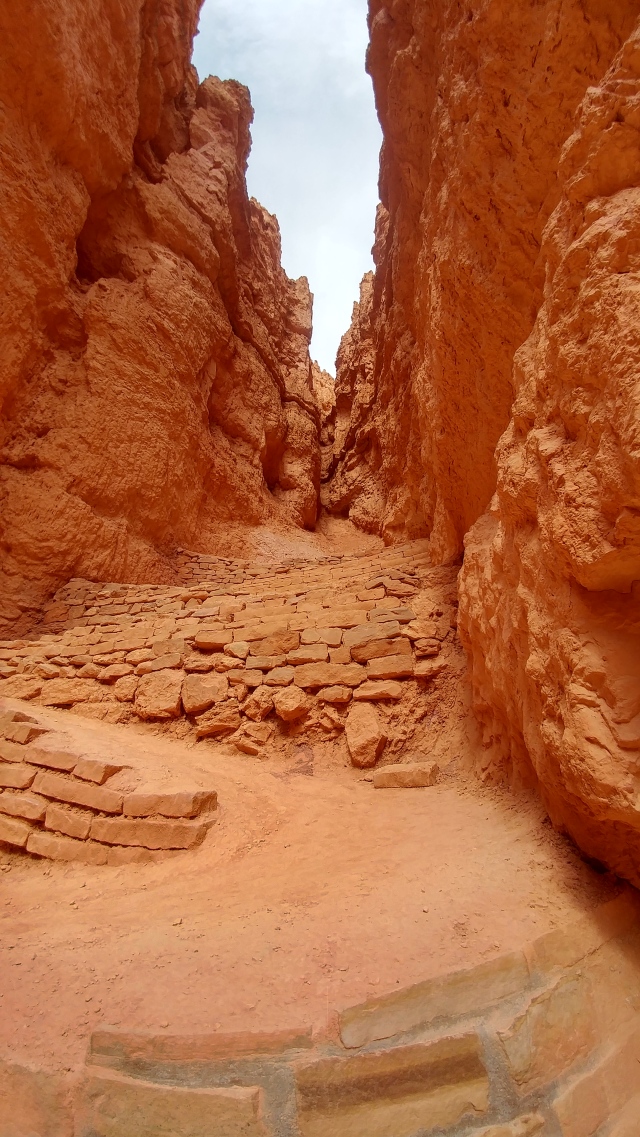 After ascending the switchbacks, we found ourselves back at the canyon rim at Sunset Point. We returned via the Rim Trail to Sunrise Point to complete the loop.

The sky was about to open up with rain, so we quickly made our exit to the Subway on highway 12 for lunch (their espresso is also quite good!). We then hung out at our hotel in the afternoon to do laundry and use the pool. When the weather cleared up, we returned into the park and drove to check out a few of the park’s lookouts. Two that were absolutely worth seeing were Natural Bridge and Agua Canyon. These pull-outs were located between miles 12-14 of the Bryce Canyon scenic drive.

On the way out of the park, we also visited the Bryce Canyon visitor center. Here, you’ll find interesting exhibits about the hoodoos at Bryce and how they compare to other rock formations from around the world.

Once were were done at the park, we headed out for dinner at the Stone Hearth Grille, a small hotel/restaurant at the end of a rural road in Tropic, Utah about 15 minutes down highway 12 from Bryce Canyon City. On a warm night, you can sit out on the patio and enjoy a sunset view of Bryce Canyon, but because of the rain, we sat inside. The polenta cake served with beans and arugula was hearty and well-balanced with an impossibly creamy polenta. The chocolate torte dessert with vanilla bean ice cream was a total knockout, too, with a rich, deep flavor. Be sure to call ahead for reservations – their kitchen is quite small, so we only got a seat because of a last minute cancellation.

That was the icing on the cake for our day in Bryce Canyon National Park! Check out our account of the longest leg of our trip, which took us through the Grand Staircase/Escalante National Monument, Capitol Reef National Park, and the Mill Canyon Dinosaur Track Site.